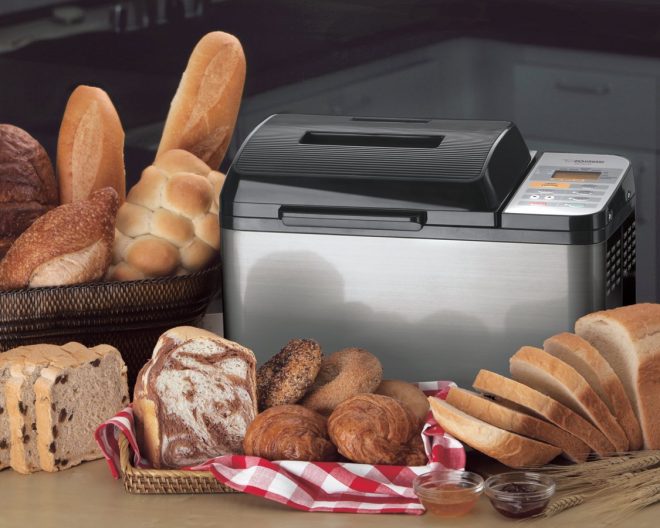 The Zojirushi BB-PAC20 Home Bakery Virtuoso Breadmaker is a very highly rated breadmaker that has some unique features that you won’t find on many other breadmakers. It’s the perfect kitchen appliance for anyone who loves their bread home-baked to perfection.

The Zojirushi BB-PAC20 breadmaker bakes large, traditional shaped, 2 pound loaves of bread, and it has a very useful quick baking cycle that will reduce bread making time to two hours. Unlike many breadmaking machines that only have one kneading blade; the BB-PAC20 has two blades, which means that the dough is kneaded more evenly and much faster. Another feature that makes this one of the best breadmakers on the market is the heating element in the lid, which gives you an evenly baked goldenbrown crust every time.

The Zojirushi Virtuoso Breadmaker is quite a heavy machine, but that gives it more stability when it is kneading the dough. It’s also surprisingly quiet for such a big and effective bread making machine. The dual kneading blades also mean that the Zojirushi BB-PAC20 will cope easily with things like seeds, nuts, rustic flours and gluten free ingredients.

The Home Bakery Virtuoso has an easy to read and easy use LCD control panel and it comes with 10 pre-programmed settings. It also has a 13 hour timer delay setting, so you can set it so that you wake up to that wonderful smell of freshly baked bread in the mornings. The Virtuoso is versatile too. As well as baking bread, you can also use the Zojirushi BB-PAC20 Breadmaker to make jam, cook meatloaf, or bake cakes as well.

is versatile, easy to clean, not too noisy, and it bakes wonderful bread. What more could you ask for from one of the top rated bread makers on the market today!